It is generally grown in fields characterized by slightly basic soils that have good drainage. Light red soils are suitable for this herb. The herb grows best in areas receiving about 500-750mm rainfall and at altitudes ranging from 600 to 1200 meters above sea level. The optimal temperature range is 20-32 degrees C. Due to the hardiness of the plant, Ashwagandha has historically been grown in areas that are not well irrigated and therefore not suitable for food crops..

Withania is a small or medium undershrub, 30-150cm height, erect, grayish, branching perennial, with strong disagreeable odour like horse’s urine. Withania somnifera is a small shrub of 1m to 2m height across. Almost the complete plant is covered and surrounded with very short, small, fine, branched hairs and silver-grey in colour. The stems of Withania are brownish dark colour and erect, sometimes leaves are absent or less on lower part of stem.

The main constituents of ashwagandha are alkaloids and steroidal lactones. Among the various alkaloids, withanine is the main constituent. The other alkaloids are somniferine, somnine, somniferinine, withananine, pseudowithanine, tropine, pseudo-tropine, 3-a-gloyloxytropane, choline, cuscohygrine, isopelletierine, anaferine and anahydrine. Two acyl steryl glucoside viz. sitoindoside VII and sitoindoside VIII have been isolated from root. The leaves contain steroidal lactones, which are commonly called withanolides. The withanolides have C28 steroidal nucleus with C9 side chain, having six membered lactone

This short and stout plant has a variety of benefits, the most widely recognized benefit of ashwagandha is its ability to boost the immune system. In fact, several studies have reportedly shown it to greatly boost the immune system, increasing white blood cell production, helping to ward off illness and disease. It’s these benefits that make it a go-to choice in Indian herbal medicine for people in recovery who are looking to rebuild their internal system after illness 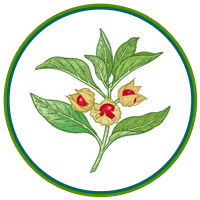